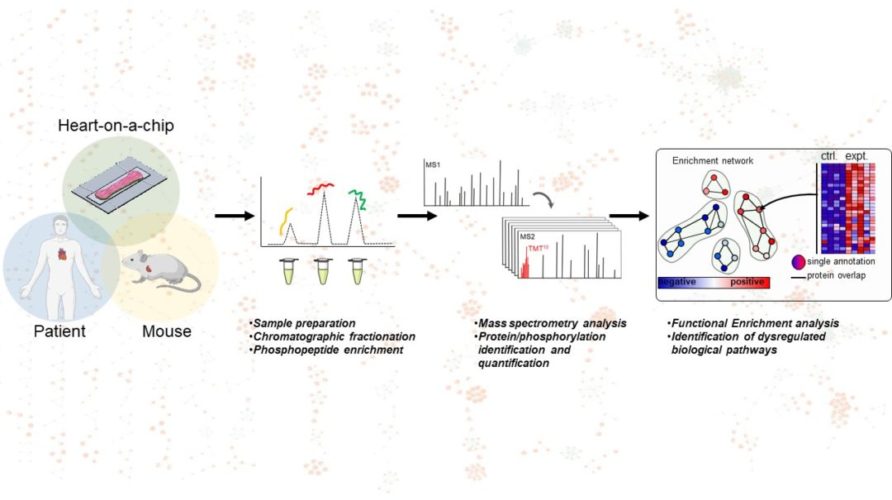 One of the leading causes of all problems that afflict the heart is cardiac fibrosis, which occurs when excess connective tissue starts to form after an injury or stimulus, often becoming a scar. There is perhaps no greater underlying trigger of heart failure.

How fibrosis develops in the heart, at the molecular level, has long been a puzzle that scientists aim to solve. But the difficulty lies in the ability to study actual human tissue samples, which must be collected, processed and stored in careful, specific ways.

Collaborators inside and outside the Ted Rogers Centre used a unique approach in a new study that leveraged advanced technologies to yield brand new insights into the molecular nature of cardiac fibrosis. (The study is led by Anthony Gramolini, Ted Rogers Centre principal investigator, Milica Radisic, Canada Research Chair in Functional Cardiovascular Tissue Engineering at U of T, and Andrew Emili, director of the Center for Network Systems Biology at Boston University.)

Proteins carry the load inside heart cells, and their development is key to understanding where disease begins. Proteins are regulated by “phosphorylation” – a biochemical reaction where a phosphate group is added to a protein to make it more, or less, active, or to change its position in the cell, or to mark it for destruction.

Combining phosphoproteomics with mass spectrometry and computational analyses, the team detected differences in protein signaling networks between healthy and cardiomyopathic hearts. Doing so, they created a map of these signalling pathways and where changes occur in diseased hearts – which researchers everywhere can now target for possible therapeutic avenues.

Uros Kuzmanov, Ted Rogers Centre researcher and first author of the new study, says this research is particularly unique as three distinct samples were used to create that map. Kuzmanov and the team identified the signaling pathways in a mouse model, in an organ-on-a-chip model called the Biowire, and in actual human tissue samples obtained from the Peter Munk Cardiac Centre biobank, directed by Dr. Phyllis Billia.

“We cross-compared the samples to see not only the changes that occur in human tissue, but how closely the two model systems reflect these changes,” Kuzmanov says. “This was the first phosphoproteomics ever used in a heart-on-a-chip model, and we found the Biowire was representative of what is going on in actual patients. This verifies that it can be used to help identify potential new therapies for cardiac fibrosis.”

Importantly, the study discovered remarkable similarity between a fibrotic heart-on-a-chip and actual diseased human hearts, which can’t be captured in a standard mouse model.

During this investigation, the team discovered a protein kinase that was severely disrupted in fibrosis samples and responsible for changes in the signaling pathways. Kuzmanov says it could be a new therapeutic target as the screening of several small molecule inhibitors targeting this kinase in the Biowire model revealed a compound that prevents fibrosis.

This study required close collaboration between clinicians in the clinic and operating rooms, bioengineers, as well as systems biology and bioinformatics experts. The team overcame the difficulty in studying patient tissue at a molecular level by ensuring the human samples were collected, transported, and stored with outmost care and diligence so that their protein and phosphorylation makeup would not alter in transit to the biobank and to the lab.

“This project not only validates the heart-on-a-chip’s high value in heart disease research, but also delivers new insights into the field, and provides new testable therapeutic approaches, with available compounds,” says Anthony Gramolini. “We are very excited about the potential to exploit these systems, not only for cardiac fibrosis, but also for other cardiomyopathies as well.”

The Ted Rogers Centre’s network of clinicians and multidisciplinary scientists made this investigation possible. This project was funded by the Centre’s Translational Biology and Engineering Program, and by two fellowship awards to researchers in the Gramolini lab.