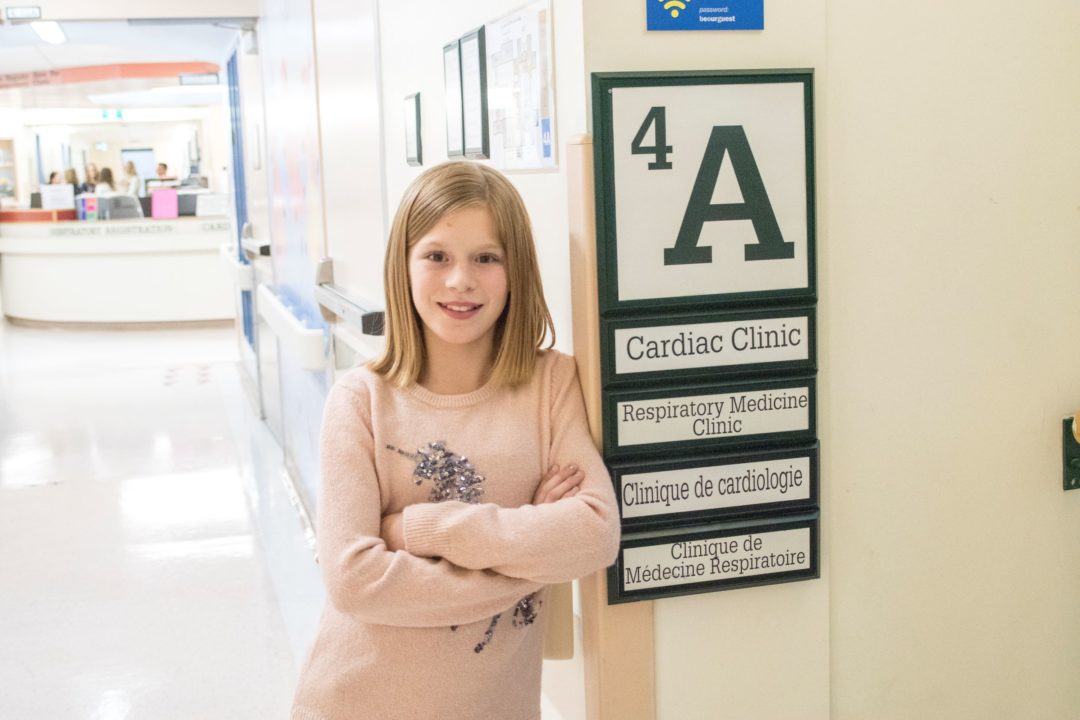 Five months pregnant with her second daughter, Cindy Desbiens was told the anatomy of her baby’s heart was incompatible with life. There was a 25% chance the child would not reach her fifth birthday.

“A life-changing thing to hear,” Cindy reflects from her home in Waterloo.

Charolette Desbiens, with an underdeveloped right atrium and ventricle, was born with hypoplastic right heart syndrome. At four days old she had a shunt surgically implanted to support her oxygen needs. The family went home but had to rush back to the hospital twice in the first month as blood clotted in the shunt.

To be safe, Charolette stayed in the hospital until another surgery at three months old, the second required shunt. “We were supposed to go home, but Charolette contracted a blood infection,” Cindy says. “She was in hospital for nearly six months before she came home. There were very difficult nights where we didn’t know if she would survive.”

On Mother’s Day 2006, Charolette was discharged home from SickKids. The family returned each month, ultimately every six months, and then each year. In that time, at age two-and-a-half, Charolette had her third and final surgery – a successful Fontan procedure – days before her older sister Olivia began junior kindergarten.

Testing the limits of family

Olivia was barely a toddler when Charolette was born. While Cindy would stay through the week in Toronto, her husband Jeff would spend the weekends. On Sunday, Cindy would return to SickKids with Olivia and they would assemble at Charolette’s side before Jeff and Olivia returned home to Waterloo.

Outside the impossible dark nights when Charolette’s condition was critical, Cindy says the hardest part was family separation and her isolation in the hospital. “The hardest part of my week was leaving Charolette at the hospital on a Friday, driving home a complete mess and feeling intense guilt,” she says.

Then on Sunday afternoons, when Jeff and Olivia returned to Waterloo, she would again experience sharp pain and struggle with her emotions. Olivia, of course, was still a baby. “I was always making a choice, one child or the other.”

And there was her husband as well. She remembers filling up at a gas station near Guelph and looking across eight lanes of traffic to another gas station, where Jeff had stopped to fill as well. They waved to one other, each headed in opposite directions.

“Our end goal was to have two healthy young girls at home, playing, laughing and living,” Cindy says. “We were willing to do what was needed to make that happen. So we put one foot in front of the other each morning, even though we were overwhelmed.”

Now, the family has a third child, Theo, who knows his sister has a “special heart.” Olivia, her mom reports, has become a very empathetic girl – a quality built by her little sister living with congenital heart disease.

They return to SickKids once a year. Years ago, Cindy and Jeff started letting Charolette manage her own appointments and ask her own questions with doctors. Cindy says one of her first queries, etched in crayon, was “why was I born this way?”

Despite lower endurance than her classmates, Charolette has done very well for a child with one ventricle. She is active in softball and ringette – where she was the second-highest goal scorer on her team. Cindy says when people find out her daughter has a heart condition, they are surprised. Charolette is a thoughtful, introspective girl who has endured unique life experiences in only a fistful of years.

“The reality is that things will change at some point for her,” Cindy says. “I think it can be frightening for her. There is a lot she doesn’t understand yet. She does know it is a lifelong condition, and there is an uncertainty about her future. We are honest with her, and we talk about the surgery she might need one day.

“Jeff and I are hopeful. I would be lying if I didn’t say I lose sleep before each appointment. I trust her care team, that they know what the next step is. If there is a positive to having a child with a life-threatening illness, it puts things into perspective. We really try to live in the moment, because there was a time where we didn’t know we would have this moment.”

Before Charolette’s Fontan procedure (and before Theo), Cindy was pregnant again. An ultrasound revealed he was a boy and he also had hypoplastic right heart syndrome. She lost the pregnancy not long after. Worried, they had Olivia do an echo, which revealed that she had a “patent foramen ovale” – a hole in the upper chambers of the heart that didn’t close after birth. It was benign heart condition, thankfully.

Jeff and Cindy also had echocardiograms, which revealed healthy hearts. There were still questions, as in most families, of the health and causes of death of extended family members long ago.

“We have four children, three living children, and only Theo didn’t have some form of heart disease,” Cindy says. “We strongly believe there is a genetic cause, and that by participating in this study we can find answers so our children will have information we did not when they grow up and start families.”

That study is the Ted Rogers Centre’s Cardiac Genome Clinic. She said before Charolette was even born, she and Jeff talked about how they would approach this diagnosis. They wanted to be a part of research to help, if not their own daughter, future generations who could learn from answers their family members’ genomes could provide.

The family has provided all their records, consented to do whole genome sequencing, and even donated DNA from the baby Cindy lost to the SickKids cardiovascular biobank now funded by the Ted Rogers Centre.

“With Charlotte’s condition, our first question was ‘why’?” Cindy says. “There was no answer. If scientists had the answer, it could be a step to uncovering new treatments. Who knows what the future holds? Something they find could change the fortunes of children born with complex congenital heart disease.

“It feels good to do something when there is so little we can do. And to give back to the hospital we are indebted to. Charolette is doing remarkably well. It feels rewarding to give back.”