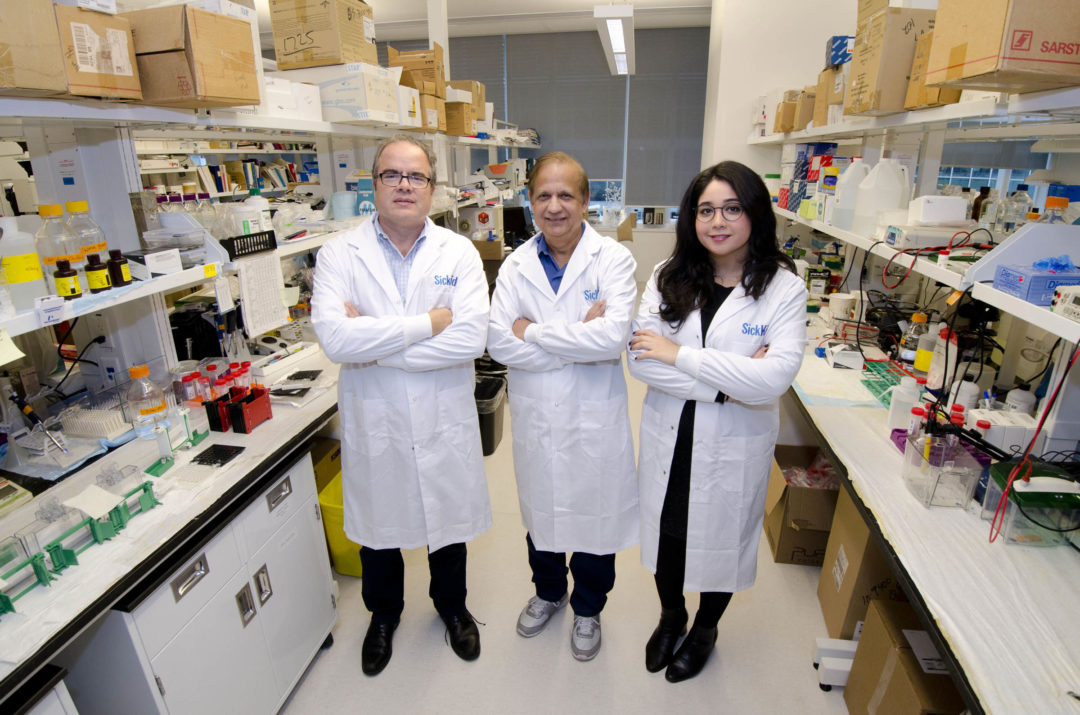 ARVC affects the muscular wall of the heart by causing it to break down over time, usually resulting in an abnormal heartbeat and potentially sudden death. Like many diseases, ARVC can stay hidden as it may not cause symptoms in its early stages. Although it is inherited, the genetic cause of ARVC remains unidentified in approximately 50 per cent of cases and one-third of diagnoses can be missed by expensive and complex annual cardiac tests.

In a study published in European Heart Journal on Sept. 17, a research team led by SickKids discovered potential new ways to diagnose and treat this life-threatening heart condition.

An astounding finding started it all

Genes that have been linked to ARVC share a common thread: they make the links that hold different heart muscle cells together. Those links are desmosomes.

Dr. Robert Hamilton, senior associate scientist in translational medicine at SickKids, recognized that desmosomes that hold heart cells together perform a similar role in the skin. He began to work closely with dermatologists because he knew that, at a molecular level, ARVC had parallels with a blistering skin disorder called pemphigus, an autoimmune disease. He suspected autoimmunity might play a role in ARVC as well, so he asked the question: Was there a similar antibody involved that could be a biomarker for ARVC?

A research team led by Hamilton found that, regardless of the specific genes involved, one antibody specific to desmosomes is observed in every patient with ARVC: anti-DSG2 (anti-Desmoglein-2).

“We expected it would only show up in isolated, non-genetic cases of arrhythmogenic cardiomyopathy,” says Hamilton, who is also a member of the Ted Rogers Centre for Heart Research. “But we were astounded to find that anti-DSG2 antibody was present in every patient, no matter what gene was involved, and if it was hereditary or not.”

The anti-DSG2 antibody can be identified in a routine blood test – and is the first autoantibody linked to ARVC. According to Hamilton, this discovery could identify 98 per cent of all cases of the disease, versus 34 per cent via genetic testing. Moreover, the blood test is simpler, more sensitive and far less expensive than annual heart tests.

Hamilton says the strength behind this surprising finding is its simple application. Routine lab tests have been testing for antibodies for decades, which could be easily adapted to hunt for the anti-DSG2 antibody in any patient. It even shows up in saliva, so the test could be used anywhere outside a hospital or clinic.

The researchers tested for anti-DSG2 in other diseases of the heart, but couldn’t find the antibodies in these other patients. Rather, anti-DSG2 seems to be specific for ARVC and appears to be linked to the cause of the condition as well, meaning researchers could develop brand new treatments for this difficult condition.

“In caring for children with dangerous heart rhythm conditions for 30 years, I became convinced that arrhythmogenic cardiomyopathy is an important cause of sudden cardiac death in children,” says Hamilton, who is also a Physician in Cardiology at SickKids and a Professor in the Department of Paediatrics at the University of Toronto. “When you consider the years of life these patients could lose, the potential impact of better diagnosis and new treatments is tremendous.”

The next step is to transform this finding into a clinical test available to clinicians around the world.

“This simple, accurate test should help us confirm cases sent for evaluation, and also identify family members who may be at risk for the disease after a relative is identified with ARVC,” Hamilton says. “And of course, spotting the disease early means that preventative measures can begin to prevent the risk of sudden cardiac death.”

To commercialize this test, Hamilton is working with the Industry Partnerships & Commercialization office at SickKids and is also participating in the Ted Rogers Centre’s new ECHO program, which provides innovators of cardiovascular technologies with entrepreneurship training, mentorship, networking, and funding opportunities. It is based in the Centre’s Translational Biology and Engineering Program.

This research was supported by the Labatt Family Heart Centre, the Canadian Institutes of Health Research (CIHR) and the SickKids Foundation through donations from the Caitlin Morris Memorial Fund, Alex Corrance Memorial Fund, Carter Family Heart Rhythm Fellowship and Meredith Cartwright, LLB. It is an example of how SickKids is making Ontario healthier, wealthier and smarter.