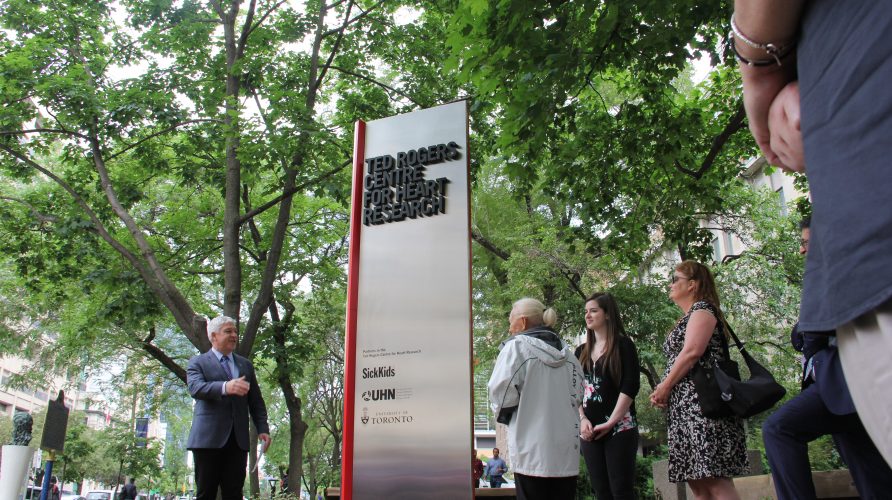 Three “sentinel” structures were unveiled in mid-June along University Avenue in Toronto, celebrating the Ted Rogers Centre for Heart Research – once a vision, now a reality.

The sentinels are aligned along the east side of University Ave., between College and Elm streets. They are situated in front of SickKids, Peter Munk Cardiac Centre, and the MaRS west tower (the location of the University of Toronto labs), representing the collaborations in heart failure research fostered by the record donation from the Rogers family in 2014.

“These sentinels are elegant reminders of the gift that sparked an incredible opportunity to change the course of one of the world’s most impactful diseases – and the partnerships that have blossomed from it,” said Mansoor Husain, executive director of the Centre, at the unveiling.

The sentinels were built to create a unifying link that underscores the teamwork underway at the three partner institutions while also being symbols of gratitude for Ted Rogers’ vision and his family’s support.

Their home on such a prominent artery in the city will raise awareness for the need for cardiovascular research and promote the work already underway to achieve the Centre’s promise of a healthy heart.

Loretta and Martha Rogers were on hand for the unveiling, as well as long-time Rogers family advisors and executives from each partner institution.

The Ted Rogers Centre launched in 2014 and supports collaborative research in genetics, advanced clinical care, cardiotoxicity, and regenerative medicine while addressing heart failure across the lifespan.