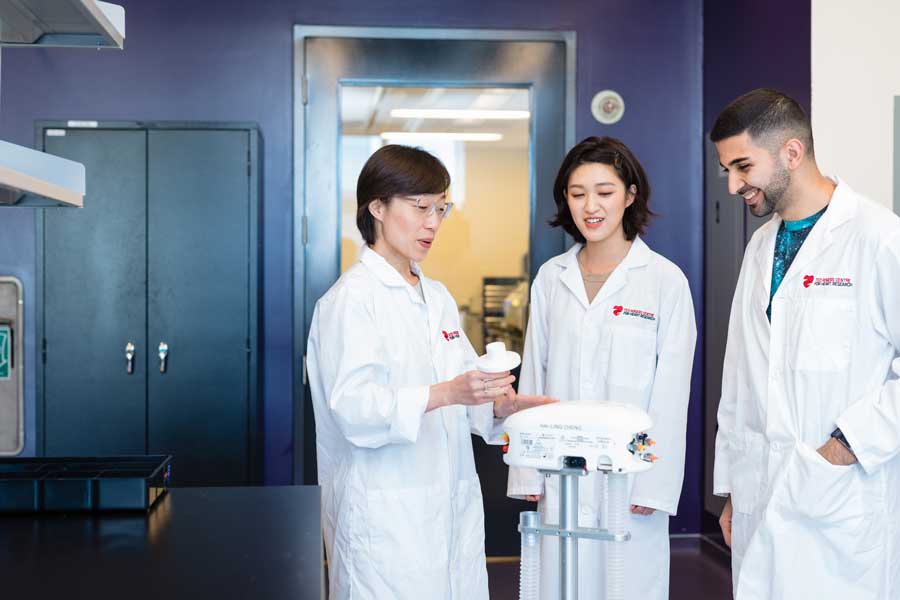 What if we could predict your vulnerability to heart failure 20 years from now by scanning your blood vessels today? This question lays at the heart of a new CIHR-funded study underway in the Ted Rogers Centre’s Translational Biology and Engineering Program.

Principal investigator Hai-Ling Margaret Cheng and her team have developed advanced magnetic resonance (MR) imaging techniques capable of analyzing blood vessels with incredible precision. This unique technology can specifically show how much a blood vessel dilates or contracts – early clues to future heart issues – independent of any other factors that could play a role. If heart rate changes, for instance, it won’t affect the measurement.

This project is nine years in the making. It comes on the heels of work in the Cheng lab that has found that in 100 per cent of animals studied, blood vessels act abnormally before any signs of heart problems. Should this be the case in people, it will be a major step forward in predicting – and thus preventing – future heart failure.

“We need new ways that work to diagnose heart failure at very early stages,” Margaret says. “Right now we are forced to wait until there are structural changes in the heart. But by then, it’s generally too late.”

Conditions such as hypertension, obesity, diabetes and kidney dysfunction can cause very gradual heart damage over years and decades. The end result is often heart failure – yet one that was hard to detect because of its slow build (versus, for instance, damage caused by a heart attack).

“By the time we can spot them, the heart has deteriorated to an incurable stage,” Margaret says. “But if the heart’s structure changes, we know that this is the consequence of something else that has been going on for a long time. That something is what we aim to uncover in the new study.”

The team’s MR technology is built to capture the earliest functional changes possible. And, as Margaret learned more about the heart’s physiology after joining the Ted Rogers Centre, she understood that blood vessel irregularities were common among people with high blood pressure and diabetes – but nobody had yet tried to image and detect these changes. Their focus became clear.

Now equipped with a five-year CIHR grant, Margaret’s team has the runway to work out new angles to important questions. Can this technology actually work to screen people whose health condition puts them at higher risk of heart failure later in life? And if so, can early detection lead to early intervention – to slow or even prevent the disease from setting in?

“To push toward the answers, our approach is to image the entire body to identify any areas where blood vessels are not functioning well and not delivering enough blood flow,” she says. “This is true, real-time dynamic imaging unlike typical MRIs, PET and CT scans, meaning we can uncover new information about the dynamics of the heart.”

In the study’s final two years, the team will recruit patients through clinical collaborators at Peter Munk Cardiac Centre. In a novel approach, all aspects of the MR technology in animals will have a mirror image to the clinical scanners at UHN. This will establish the foundation for clinical workup of patients at risk for heart failure.

The study has a therapeutic component as well. Margaret will investigate if providing the diabetes drug Jardiance at the earliest indication of disease can slow progression to heart failure in mice with abnormal blood vessel functions.

Margaret’s work in developing and proving the value of MR technology to examine microvascular changes has been supported over the past decade by a team of trainees led by Sadi Loai, Aaron Troy and Tameshwar Ganesh.

Margaret used seed funding from the Heart & Stroke Foundation, NSERC, and the Translational Biology and Engineering Program to generate enough data in the lab to secure a fully funded CIHR project with tremendous potential.