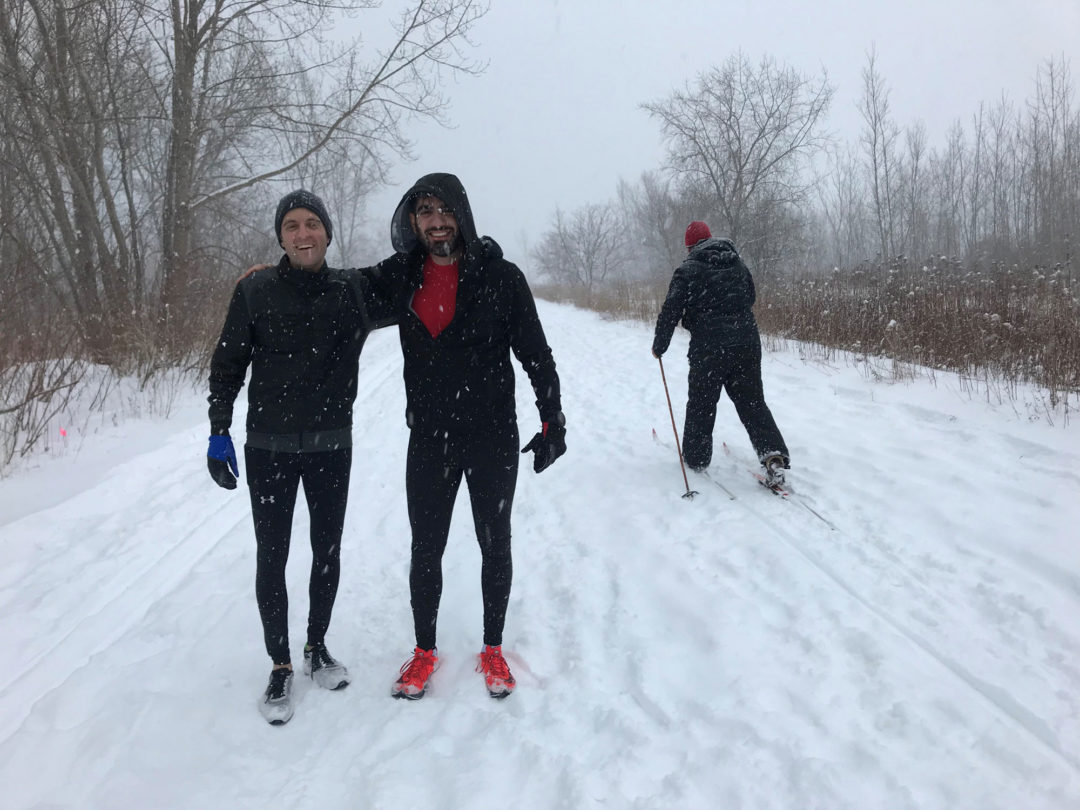 Normally heart failure and related research would consume Dr. Jeremy Kobulnik and Farid Foroutan. Still the case, but so too these days, training. Specifically, dissecting every detail of their exercise, nutrition and lifestyle regimen to build endurance for the biggest fitness challenge either of them have ever undertaken.

“We don’t typically do distant races, but it turned out that the marathon, the Paris International Marathon, which occurs annually, was happening the weekend before our conference. So we said, wouldn’t that be great, and so we checked to see if there was any availability. It was a bit of on a whim,” says Dr. Kobulnik, cardiologist, Peter Munk Cardiac Centre and Mt. Sinai Hospital.

And they are raising funds for heart research.

On Sunday April 8, that ‘whim’ will whir to the beat of more than 50,000 runners churning across a 42 km course — skimming past scenic views, over cobblestone streets, along winding roads and hills — a demanding physical odyssey, likely to last well over three hours.

Among the estimated 145 nationalities represented at the famed French marathon there will be at least two Canadians, one a doctor, the other a researcher, both with expertise in heart failure and cardiac transplantation.

“The most challenging part has been to fit in the training into a very, very tight and busy schedule,” says Foroutan, a PhD student and research fellow at the Ted Rogers Centre for Heart Research, with a clinical epidemiology and biostatistics background. “The distances are increasing for the training that we have to do and it’s hard to justify putting in 15 kilometres per hour, when you have a number of things that you need to do for work and your research projects that are on the line and they have to get done.”

Without a personal trainer or coach, both men are navigating the road to preparation for the marathon by themselves. 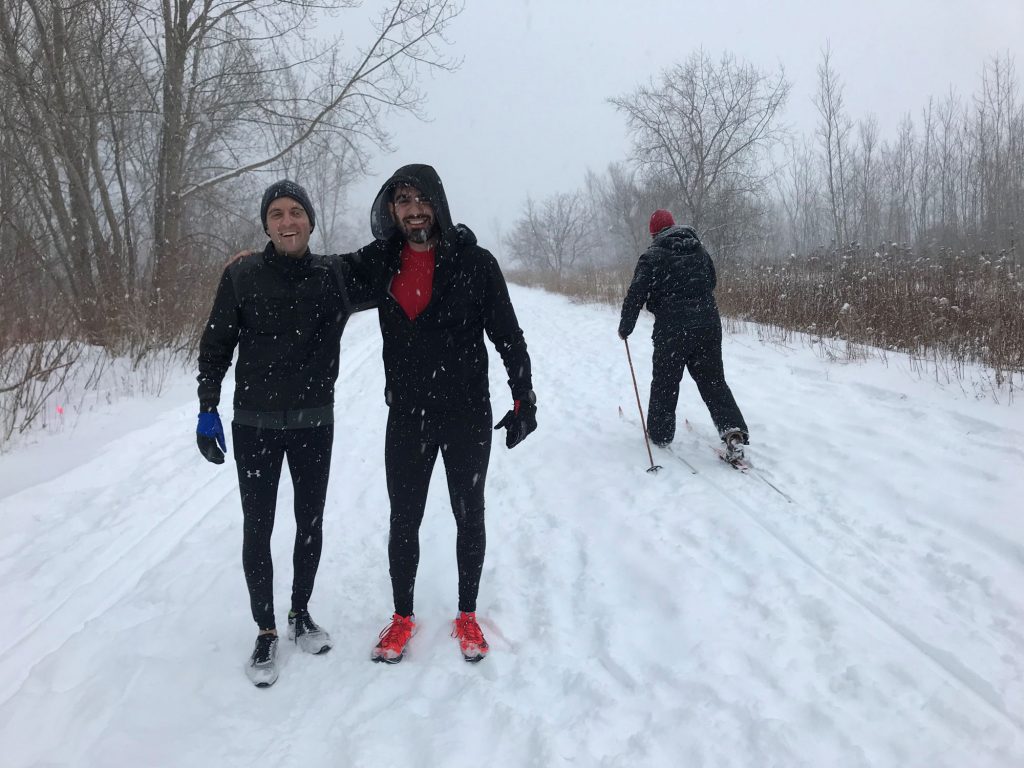 “Our training started right when we signed up for the marathon. And at first it was short distances just to get the body used to running, getting the knees and legs used to the impact that you have to take in,” says Foroutan. “It involves also strength training just to prevent injuries from happening. So we’ll do squats, anything with free weights, helps. But most of the training is actually running.”

That includes running focused on building speed and separately, on endurance. And yes, that has also meant a combination of warm, indoor treadmill running, and persevering through bitter winter conditions.

“Our limits have been tested by the weather,” Dr. Kobulnik concedes. “I’ve never been so obsessed with checking wind reports and temperature reports,” as he recalls a recent two-hour run during which the mercury dropped, a wind chill descended, and his hands became frozen. In the end after some quick thawing, he mustered enough movement to wrest open a container of jelly beans for a desperately-needed energy rush.

In addition to working on average between 60-65 hours per week, Dr. Kobulnik has been training six days a week totalling an additional 12 hours. He’s also had to modify his diet and increase the amount of sleep he gets to 7-8 hours a night to compensate for the intense training regime.

“I personally can be receiving calls about patients and have to take several calls during long runs and having to re-focus on what was going on with the patient and then going back to training. I think that has tested our limits.”

Foroutan’s typical day runs about 11 hours, packed with research focused on the prognosis of heart failure and heart transplant patients, management strategies for deceased donor hearts, among other areas. He trains five days a week, sometimes finding himself on the verge of collapse.

“When you’ve had a long day and it just seems like the easiest thing to do is to go to bed, coming back to that phrase ‘your life is worth one hour a day’ is what allows me to put my running shoes on and get out there and get the training done,” he says.

A MANTRA, MOVEMENT AND MENTOR

‘That phrase’ and ‘Test Your Limits — a mantra and a movement, respectively, spearheaded by Dr. Heather Ross, cardiologist, Peter Munk Cardiac Centre, and scientific lead, Ted Rogers Centre for Heart Research, is the impetus and motivation for Dr. Kobulnik and Foroutan’s current efforts.

“Her training was grueling. It always impressed me that she managed to pull all of this off, while still taking extremely good care of her patients and I think she has provided an excellent role model,” says Dr. Kobulnik. “On the days when I say to myself how can I possibly do all of this, I do think about that fact, about what she has been able to accomplish and say, alright well, let’s test our limits.”

Adds Foroutan, “First thing that I ever heard was her catch-phrase ‘your life is worth one hour a day’. I fell in love with that phrase. It just resonates so well with everybody’s life. Whether it’s just eating healthy or being active, it all counts. And so that’s something that inspires me in my training now for this marathon.”

Dr. Ross has undertaken several global adventure treks since 2006 to raise awareness and funds for heart disease research. She is set to embark on her eighth Test Your Limits trek in April 2018 to Greenland.

“We’d love for a sub-three and a half hour marathon,” Dr. Kobulnik says with a smile. “And our goal is to raise money so that we can continue to do the excellent work that we do here at the Peter Munk Cardiac Centre and the Ted Rogers Centre for Heart Research.”

Recent winners of the Paris International Marathon have clocked in at just over two hours.

For now, the pair hope jet lag, a foreign city and unknown terrain don’t interfere with crossing the finish line. Then they look forward to a wonderful meal in Paris and participating in the International Society for Heart and Lung Transplantation conference.

It is a journey that has already impacted their lives and they hope the lives of others, be they individuals with heart disease, those waiting for a donor heart and others who strive to never be cardiac patients.