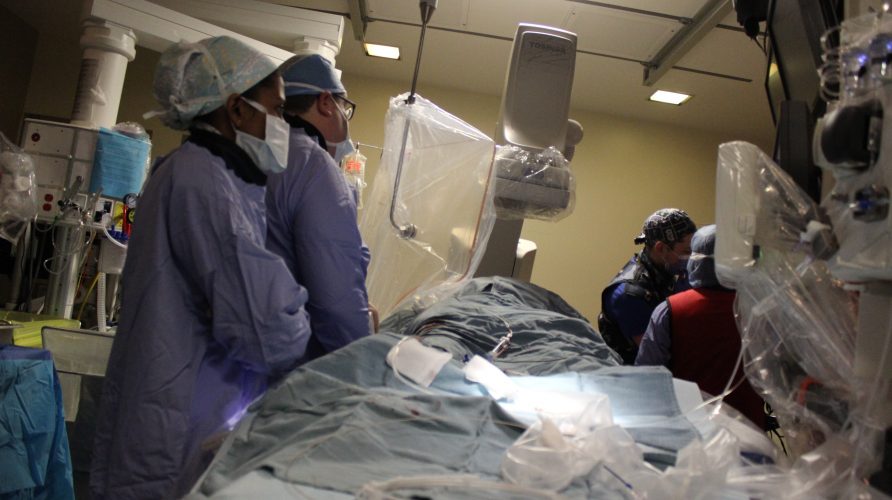 In a Canadian first, a medical team has implanted a wireless device inside a heart failure patient, permitting clinicians to monitor the patient’s cardiovascular status – virtually and in real-time – and proactively adjust treatment to prevent costly, potentially unnecessary hospitalization.

“Hospitalization is often necessary when patients start to retain fluid, develop congestion and experience shortness of breath. This technology is a way to directly measure how much fluid is in a patient, allowing us to intervene before they develop symptoms of congestion, before they end up in hospital. This is a big game-changer.”

Funded by the Ted Rogers Centre for Heart Research, the device called CardioMEMS™ HF System was successfully implanted by interventional cardiologists at the Peter Munk Cardiac Centre in March 2017.  The system features a small butterfly-like sensor that then sits inside the pulmonary artery of a heart failure patient. When the patient lies on an accompanying antenna-equipped pillow device, the sensor provides important data – including the patient’s lung pressure readings to clinicians – via a secure website.

“Never before have we had the ability to obtain a patient’s accurate lung pressure data while they are outside the hospital,” said Meredith Linghorne, nurse practitioner, Peter Munk Cardiac Centre. “Traditionally we’ve relied on a patient describing symptoms, and by then they may have already progressed to the point of hospitalization. With this device, we can see warning signs days in advance, and adjust treatment accordingly.”

The most rapidly rising cardiovascular disease in Canada, heart failure affects close to one million Canadians, and an estimated 26 million people globally. In Canada, heart failure patients stay an average of almost 10 days for each hospital admission, accounting for 1.4 million hospital stays a year. These patients live an average of 2.1 years after diagnosis and cost the Canadian health-care system more than $3 billion annually. About one-quarter of these patients return to hospital within three months, while approximately 50 per cent return to hospital within six months.

The CardioMEMS™ HF System is designed to monitor heart failure patients whose condition is serious but who are not so ill that the technology cannot improve their outcome. The first Canadian patient implanted with the heart monitor will be among 25 patients within the Ted Rogers Centre for Heart Research at the Peter Munk Cardiac Centre to be fitted with the device over the next nine months.

Produced by Abbott, the CardioMEMS HF System is approved in the United States by the Food & Drug Administration and is currently awaiting approval by Health Canada.